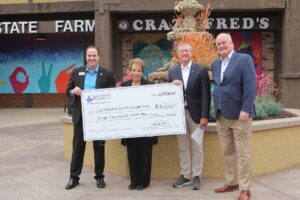 On Friday, June 5th folks came together to accept check donations from leading businesses that wanted to make a positive impact in the fundraising efforts to assist La Mesa businesses affected by the riots and looting on Saturday, May 30th. Those accepting the first generous $5,000 check from Todd Lane, President & CEO of California Coast Credit Union were: East County Chamber of Commerce, President & CEO, Rick Wilson, La Mesa Chamber President, CEO, Mary England and East County Chamber of Commerce Foundation President, Patrick Howard. Mr. Lane was joined by a few Board Member members and several employees. Mr. Lane shared the philosophy of California Coast Credit Union, as well as the dedication of the entire California Coast Credit Union team, that are committed to making a difference in all communities that they are pleased to serve. 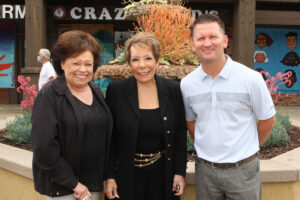 The second check in the amount of $5,000 was presented by John Snyder, EDCO’s Vice President and Chief Amin. Officer who was joined by Sandy Burr, Vice Chairman of the Board of EDCO. EDCO has been a member of the La Mesa community for decades and calls La Mesa home.

EDCO is a family-owned and locally operated waste collection and recycling company. EDCO serve numerous communities in Southern California since 1967. Those within La Mesa and surrounding cities know of EDCO’s generosity and participation in all community events. Sandy and Ed Burr are known throughout the region for supporting activities that enhance people’s lives.